There is something in October sets the gypsy blood astir;
We must rise and follow her,When from every hill of flameShe calls and calls each vagabond by name. (From "A Vagabond Song" by Bliss Carman, Canadian poet [1861-1929])

October's at once my favorite and most dreaded month. I love its gold-drenched splendor even as I sorrow for the end of summer's pleasures and the onset of winter's privations. Since nomadic cultures have always enthralled me, Carman's lines came as a piquant surprise when I discovered his poem a couple of weeks ago. Most of what I've been watching and reading lately deals with wanderers; just now it's documentaries about the roving tribes of today's Rajasthan and the steppes of Central Asia, and memoirs by Himalayan explorers from Queen Victoria's time. Given such exotic reality, writing fiction has been difficult.

Others, however, have been spinning wondrous yarns, in particular my friend Ilana Teitelbaum (pen name Ilana C. Myer) whose debut epic fantasy Last Song Before Night is fresh off the presses and reaping richly-deserved critical acclaim. Synopsis and first chapters can be found here, and clicking the lovely cover links to Amazon.com. An enchanting world awaits. 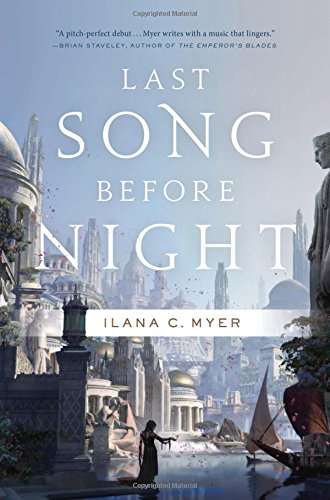 Posted by Carolyn Kephart at 7:19 PM No comments:

Matters of the Heart

I've been away a while, but hope to be posting with greater frequency than has been the case for the past few years. The following is not just an explanation for my absence, but a cautionary tale.

About three years ago I wanted to lose a few pounds and started cutting back on carbohydrates. Besides avoiding sweets and limiting starches, I began using saccharin in my coffee instead of sugar. The flat tinny aftertaste was unpleasant at first, but I soon got used to it. Other than that, I steered clear of anything artificially sweetened.

I only drink coffee in the morning and limit my intake to two cups, and thus used four pink packets a day except for occasional temporary switches to yellow packets (sucralose) or blue ones (aspartame) during travels. About half a year into this regimen I started feeling short of breath whenever I exerted myself. It progressively worsened, until by the third year even climbing stairs and doing routine chores was making me feel faint and dizzy. Near my house is a little lake that I've walked around twice a week with my husband for a decade, and during the past two years each time had become more difficult than the last. By August of 2014 I had to halt every few minutes and lean against a tree because my heart was battering so hard that I thought it'd burst out of my chest like John Hurt's hatchling in Alien.

At first I thought the culprit might be the Lovastatin I'd been prescribed the year before, but the symptoms didn't lessen when I quit taking it. Finally, in the fall of 2014 I decided to consult heart specialists. They put me through an extensive battery of tests, but found nothing they could pinpoint as the cause of the problem. Maybe the trouble was pulmonary, they suggested; but lung specialists found nothing amiss. A thorough general checkup revealed no issues of consequence. According to all measurable data, my health was good.

But I knew I wasn't well, in ways that went deeper than just my body. For three years I'd become increasingly reclusive and withdrawn. I no longer felt like entertaining, socializing, traveling. I struggled to finish my novel Queen of Time, then couldn't summon the energy to promote it. I let my online presence dwindle to almost nothing. Great chances came my way and I passed them up. Worst of all, I neglected beautiful things and they disappeared.

Then sometime around last November I decided to quit using artificial sweeteners and go back to sugar. Within a month I started feeling better. Lately I've been striding around the three miles of the lake path with effortless agility, never stopping once, never gasping once. I'm cleaning up my house and rediscovering my friends and getting out more. Last week I finished and submitted a short story and moved on to another, with more and bigger projects to come. Lost time is gone forever, but I'm doing all I can with Now.

Other than switching to saccharin I made no significant changes to my lifestyle during the interval I've described. I don't think it helped me lose weight; cutting out sweets and starches did. I'm aware that millions of people take saccharin with no ill effects and that it's deemed safe by the FDA, which is why I began using it in the first place, but I believe beyond a doubt's shadow that had I not stopped, I might not be around now to write this.

So it's good to be back. My next entry will deal with cheerier things.

CK
Posted by Carolyn Kephart at 12:00 PM No comments: