[Information about my other writing can be found here. Happy reading!] 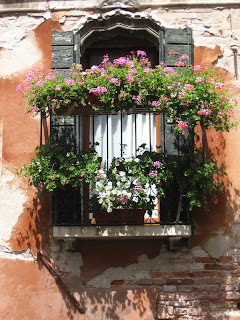 Ciao, amici! It's been a travel-rich summer with no time to blog, since I spent most of June in the Rockies and explored Italy for the month of July. Eventually I'll post about the West, but this one's all about bella Italia. I'd visited there many years ago and it was a pleasure to return, especially since nothing went seriously wrong, the places we stayed were uniformly comfortable, and everyone we met kindly tolerated my rusty struggles with their native tongue.

Hub had a week-long conference at Pisa, after which we explored Tuscany and Umbria by train before ending up in Venice. We visited as many towns as our schedule and stamina would permit, with a preference for new territory. Since we never got enough of Venice, we gave ourselves three days there to crown our travels. Unlike my past visits, this time I had a camera with me, and I nearly wore it out. Click on the images to enlarge them to full size. 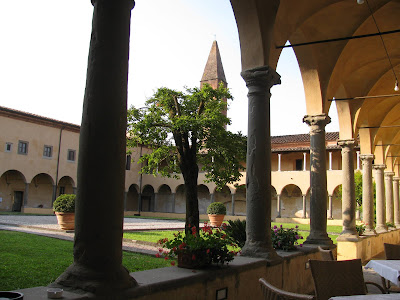 During our week at Pisa we stayed at this former monastery. Although the monks had long departed, their church was still in active use, and its early Mass bells were our wake-up call. 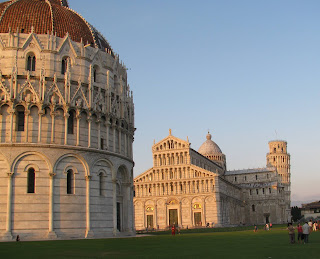 An evening view of what Pisa is famous for, peeking out behind its companions. They all look a bit off-kilter to me. Assisi with its immense church dedicated to St. Francis, viewed from our hotel window. The local bus spared us what would have been a stiffish climb. 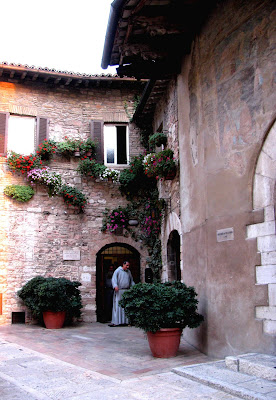 A monk enjoys the cool of the Assisi evening. Compared to the throngs of pilgrims and tourists I remember from my first visit back in the 80s, Assisi seemed very quiet this time. 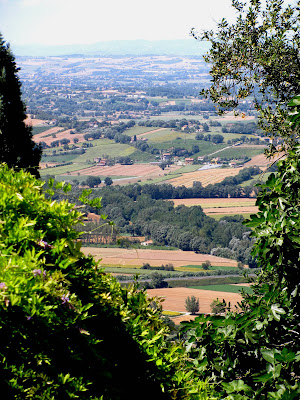 The tranquil Tuscan landscape viewed from
the heights of ancient, austere Todi. 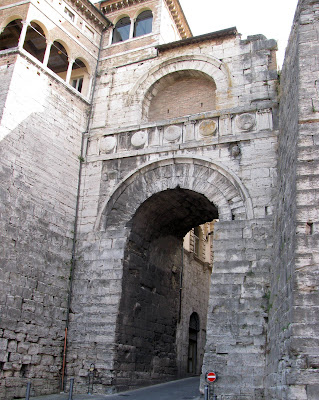 One of mighty-walled Perugia's massive Etruscan/Roman gates; the traffic sign gives an idea of its size. The Umbrian Jazz Festival was in full swing while we were visiting, and we wandered the town enjoying free music from stage acts and street musicians. 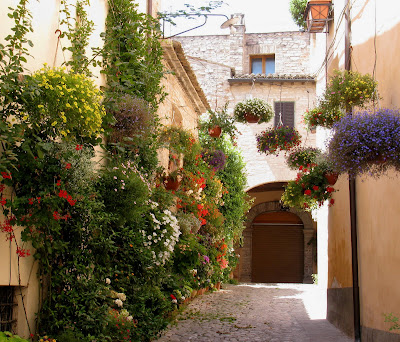 A street in Spello, one of the loveliest places in Tuscany. 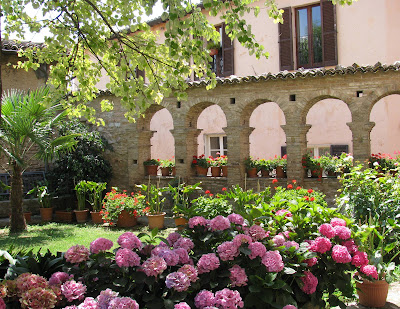 Another view of Spello. I loved its unspoiled, unstudied charm, and hope its citizens someday decide to lessen (or better yet, eliminate) car traffic through the narrow streets, a regrettable feature of Italy's medieval towns. 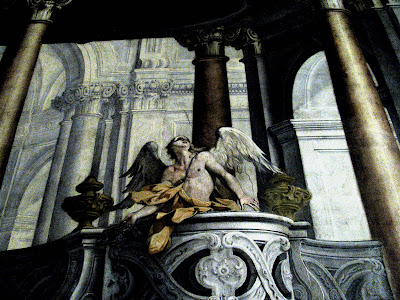 Gloria! An ecstatic upward-yearning angel on a
chapel fresco in gracious, art-filled Modena. 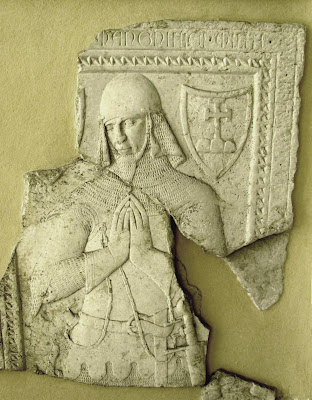 What Chaucer would call a 'a verray, parfit, gentil knyght,' found gracing a wall of Modena's archaeological museum. The sculpture's low relief and other aspects of its style remind me of Egyptian art, making me wonder if this unknown paladin was a Crusader. 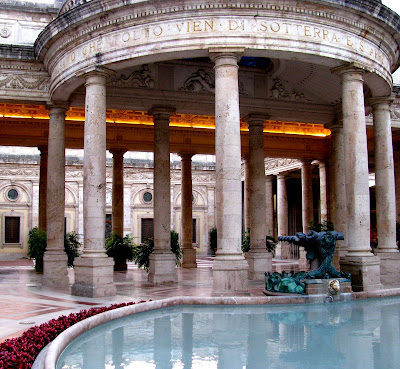 A stately pleasure-dome indeed: the fantastic pavilion at the luxurious Tettuccio Spa in Montecatini Terme, a resort once frequented by the likes of Audrey Hepburn, Clark Gable and Sofia Loren. Taking the waters is a declining pastime now, and as a result the pavilion is only open for special events. By lucky chance a charity gala was going on, and the door guard let us in to look around. 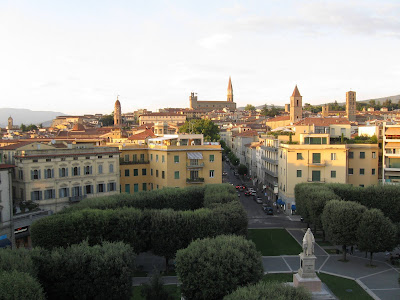 Towers and church spires of the hilltop old quarter of Arezzo spike the horizon in this view from our hotel's roof terrace. Touristed mostly by Italians who come for its classic ambiance, annual jousting tournament and association with the film La vita è bella (Life Is Beautiful), Arezzo is a gem of a town, full of beauty, vitality and warmth. So few Americans visit Arezzo that Hub and I, who are both blondish, were routinely mistaken for Germans. 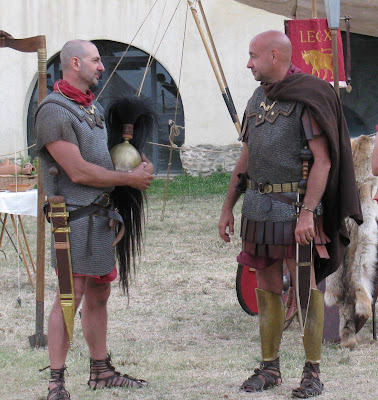 No, I don't own a time machine, and these soldiers aren't discussing their upcoming campaign against the Picts. They're Roman re-enactors at the amphitheater ruins in Arezzo, looking perfectly at home in legionary gear. 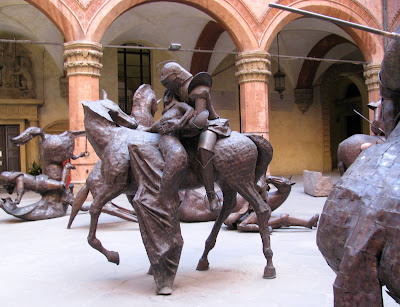 Bologna, which I'd loved at first sight years ago, had changed very much. Still, I was intrigued by a sculpture show in one of the courtyards, full of stylized slaughter and rapine. Viewers could get as close to as they liked and the place was packed, but somehow I managed to take a few snaps that weren't crowded with people, like the picture above. 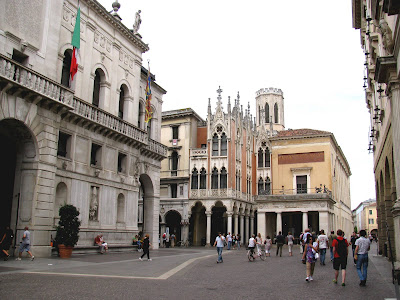 Padua's university district, dating from the Middle Ages. Graduation was going on, and we watched students celebrating with friends and family in hilarious ceremonies steeped in ancient tradition--costumes, speeches, jokes and songs, accompanied by lots of wine. Despite all the fun, I could tell it was a very proud moment for everyone concerned. In Modena I saw honorees crowned with actual laurel wreaths. 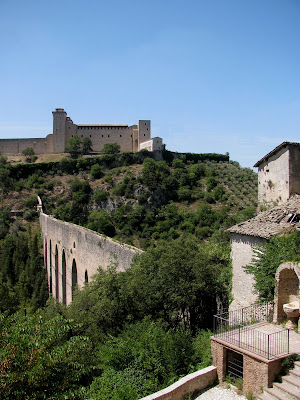 The Roman acqueduct at Spoleto, flanked by a monastery and a fortress, the latter built to guard the water supply. Spoleto's famous music festival had just ended, but there was much else to enjoy, from the giant Calder sculpture in front of the train station to the winding maze of medieval streets and the wonderful architecture from every century. 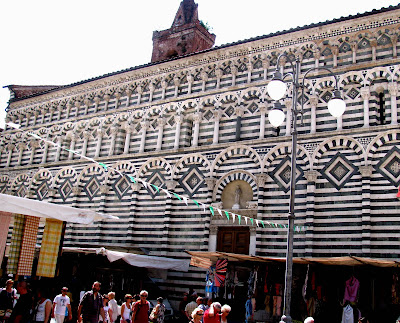 The striking, typically Tuscan banded-marble cathedral in Pistoia, one of several such buildings in the city's old center. The weekly market was taking place when we visited, making for a lively, crowded scene. 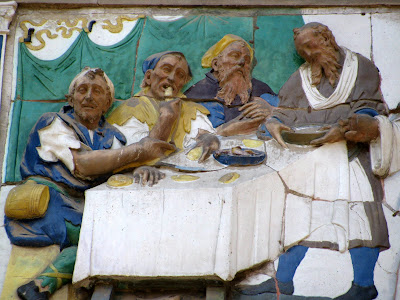 Pistoia's a bit rough around the edges, and I saw a lot of faces that would fit in perfectly with this detail from the c. 1525 terra-cotta reliefs depicting the Seven Works of Mercy on the loggia of the Ospedale del Ceppo. The hospital was founded in 1277, enlarged after the Black Death in 1348, and is still used as an administration building. 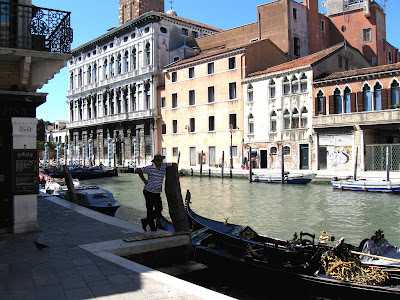 On a typically broiling Venice summer day this gondolier wisely waits in the shade for customers, who should appear very soon. Despite the high prices for rides (starting at about $80 a half-hour), I saw far many more gondole in action on this visit than I did during my first trip years ago. Mainland Chinese seemed to make up a large fraction of the clientele this time. 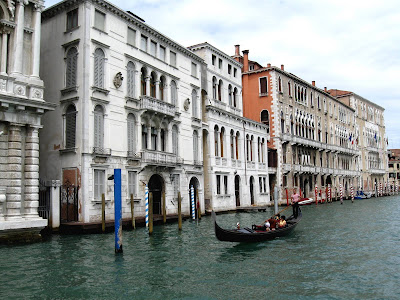 Palazzi on the Grand Canal. Since 2011 is a Biennale year and many countries rent floors of beautiful buildings like these to serve as galleries, Hub and I had the glorious opportunity to enjoy not only the art exhibits, but the wonderful rooms once inhabited by noble families. I loved the frescoed walls and ceilings, terrazzo and inlay floors, and magnificent balcony views of the most fascinating main street in all the world. 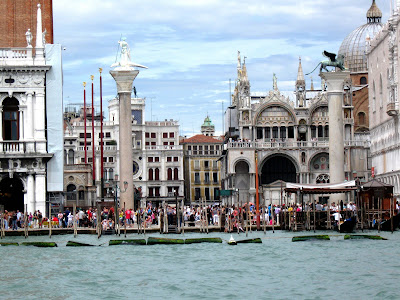 A water view of the Piazza San Marco, taken during the ten-minute trip back to our lodgings on the Lido. We had a 3-day pass for unlimited vaporetto rides to all parts of Venice and the outlying islands, and it was always a pleasure to cruise down the Grand Canal on our way home. The Lido was a restful, small-town-feeling, welcome break from the tourist mobs. 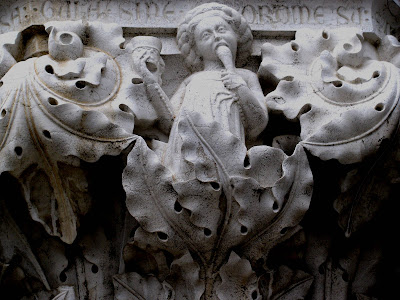 A detail from one of the medieval 15th-century column capitals of the doge's palace at Saint Mark's square. The theme is the Seven Deadly Sins, and this panel features Gluttony. Hub insisted that the greedy lady is devouring a cone of gelato rather than a chicken drumstick, probably in allusion to my own passion for Italy's amazing ice cream. (For what it's worth, you can see the bird's claws just below Gluttony's clutching hand.)
I took hundreds more pictures, but these few give an idea of how much I enjoyed my return trip to a country that has given me countless things of beauty from the most distant past to the present moment, all of them joys forever.
Now that I'm home and settled in for a while, I'll be putting all my efforts into getting Queen of Time published. As soon as it's live, I'll be posting the news here.
Arrivederci,
CK 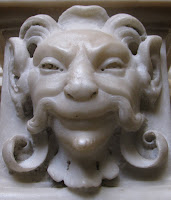