Food of the Gods

It's mango mochi. It can only be mango mochi. Disregard the garishly-hued whole items on the plate and contemplate the cut-open white one. That's the thing I mean. 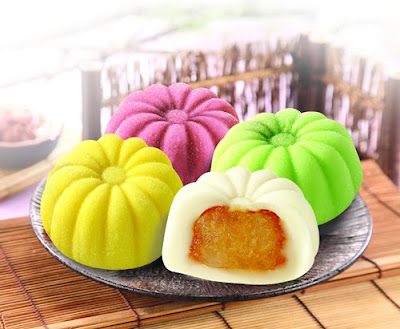 Hub and I buy most of our groceries at the local Asian market because they're cheaper, tastier and more unpredictable than the ones at the regular chains. Every week or so we make the drive to get long skinny Chinese eggplants, chubby striped Mexican zucchini, leeks, chard, pod peas, Thai basil for pesto, as well as Malaysian cream crackers and coconut biscuits. Recently the market started carrying different kinds of mochi, and we bought lots of the matcha (green tea) variety, having loved it since Japan; but last week we discovered mango. Surely the kami favored us that day.

Just opening the box and breathing in the fragrance was heaven, and those little bundt-cake shapes were so adorably cute. Then it only got better: the most tender fresh glutinous rice wrapping , satiny to the teeth, just sweet enough, enrobing an ambrosial smooth mango conserve. I could have scarfed the whole 6-piece box in a sitting, but had to leave some for Hub.

I'm almost tempted to start a food blog.
Posted by Carolyn Kephart at 5:53 PM No comments:

The first real Spring days have begun, and they're splendid. My daffodils had glorious innings, and my crabapple and redbud trees are now on the point of bursting into bloom. I've opened the windows wide, letting in the sweet winds from the south. 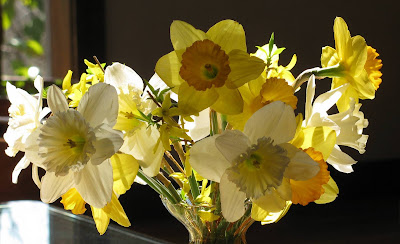 I've finally gotten around to making a map of the world in which The Ryel Saga takes place, and now have even greater respect for cartographers. It's so much easier to just write, and let the lands fill out in imagination.

Although I didn't model any of The Ryel Saga's characters on actual or fictional persons, I was very much inspired by art. If it hadn't been for Donatello, I'd never have written the scene in which Lord Michael Essern, perhaps my favorite character in the story, appears in Almancar disguised as a grim and squalid street preacher. It was the statue of the prophet Habbakuk that made me envision my black-uniformed soldier-sorcerer with the shoulder-length skeins of blood-red hair as a shorn and ragged-robed fanatic, spreading the ruinous word of the Master, a deity in harsh absolute contrast to the gentle forgiving pantheon of Destimar's luxurious capital. This is a man tormented since birth by demon-bane, who once served his country honorably but has been corrupted by the false promises of a malignant power, and is now capable of terrible crimes. The statue perfectly captures his intensity and isolation.

Posted by Carolyn Kephart at 6:54 PM No comments: