My Norse-themed tale The Kind Gods was published today in the current issue of Bewildering Stories, a speculative fiction e-zine with a venerable reputation and a multiplicity of offerings in the form of short fiction, novellas, novel excerpts, nonfiction contributions, and reviews.

You're invited to read the story and check out my BwS bio, and if you're inclined to engage in a discussion of The Kind Gods, feel free to at the bottom of the page of Challenge 429. 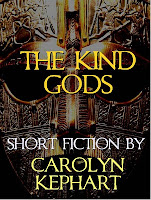 The story has been getting thousands of downloads on Smashwords, and many readers consider it a classic. Enjoy!

CK
Posted by Carolyn Kephart at 7:00 PM No comments:

(Note: information about my other writing can be found here.)
La la! It's May, the lusty month of May!
That darling month when ev'ryone throws self-control away! ~Camelot, the musical


"So it befell in the month of May, Queen Guenever called unto her knights of the Table Round; and she gave them warning that early upon the morrow she would ride a-Maying into woods and fields beside Westminster." ~ Sir Thomas Malory, Le Morte d'Arthur

I like to think that Guinevere, a lady I admire despite her often taxing behavior (I'd have let my knights sleep in), was singing  Kalenda Maya during her diversions. A medieval ballad in honor of May Day, it was a smash hit in its time; an authentic-sounding (to me at least) version of it can be found here, and the lyrics with English translation are here (along with an automatic midi file that plays when the site loads, so be warned).

Which leads me to some gently cautionary verse from a more complicated century:

"How vainly men themselves amaze
To win the palm, the oak, or bays ;
And their uncessant labors see
Crowned from some single herb or tree,
Whose short and narrow-vergèd shade
Does prudently their toils upbraid ;
While all the flowers and trees do close
To weave the garlands of repose." ~from The Garden, by Andrew Marvell (c. 1650)

Marvell, whose last name wonderfully describes his poetry, was using botanical shorthand to indicate the honors men strive for, or once did: palm for saintly endeavors, oak for great deeds civic or martial, bays for artistic achievement. I've vainly amazed myself in pursuit of the latter all my writing life, and will continue in the quest no matter how quixotic--always remembering that I owe that adjective to Cervantes, who also wryly noted "I know well what the temptations of the devil are, and that one of the greatest is putting it into a man's head that he can write and print a book by which he will get as much fame as money, and as much money as fame" (Don Quixote, Book II).

But if I had leisure to construct a garland of repose, it'd be made of irises and peonies just now, since they're growing in lush Spring profusion all around the house. Huge ruffly showy blooms they are, and would make a glorious Pre-Raphaelitish sort of crown, or fetching noggin-toppers like those sported by the brazen nymphs in the divinely preposterous Chevalier Aux Fleurs (1894). Click image for a big view.

May the Muses guide and cherish their elect,

Posted by Carolyn Kephart at 4:03 PM No comments: