"Lutes, Laurels, Seas of Milk, and Ships of Amber." ~Belvidera in her mad scene, from Thomas Otway's tragedy Venice Preserv'd (1682)

As with the duck of the adage, there's been a lot of flurry beneath the seeming serenity of my life lately. I've been writing and publishing other things besides this blog, which explains the long stretch since my last post. The Ryel Saga, having garnered many readers as an e-book, has finally been birthed into a paperback with the inclusion at long last of a map of my protagonist's world.
Queen of Time, my foray into contemporary magic realism, is likewise now available as both an e-book and a paperback. Unlike The Ryel Saga it's on the slender side (230 pages), takes place in the here and now, and is sometimes overtly autobiographical. It's also even more timely than I'd intended, since the story's mention of a Mayan Ragnarok had been written well before the coming event was world knowledge.
The other day I dusted off a work in progress that made me think of the quote that heads this post, which in turn led me to recall the Schatzkammern, Wunderschranken, and cabinets of curiosities that were popular in England and northern Europe during the 16th through the 18th centuries. I've always loved such collections, and make a point of seeking them out when I travel. By far the most memorable--breathtaking, really--have been the fabulous Green Vaults (Grünes Gewölbe) at the royal castle in Dresden. Never before or since have I encountered so many precious things gathered in one place--the most lavish, glittering, gorgeous assemblage of objects, truly 'beauty too rich for use,' since every item is meant to be admired solely for its combination of costly materials and exquisite workmanship.
The driving force behind the Green Vaults was Augustus the Strong, a cultivated lover of the finer things who spent immense sums on art, palaces, and amours (he was said to have enjoyed more than three hundred mistresses, and kept a gallery of their portraits to record his conquests). His penchant for magnificence coincided perfectly with the opulent age in which he lived, and under his direction the Green Vaults filled with masterpieces of the Baroque wrought in gold, silver, enamel, jewels, and other precious materials. I don't remember a ship of amber, but there was one of ivory. 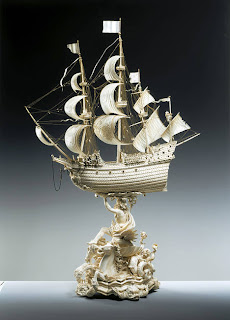 The pride of the Vaults is The Court of Aurangzeb, a masterwork in precious metals, enamel, and gems depicting the enthroned sultan surrounded by his entourage. More than a hundred tiny figures, all about three inches high, are depicted in exquisite detail. It took eight years to make, and cost the price of a castle. Click the image for a larger view. 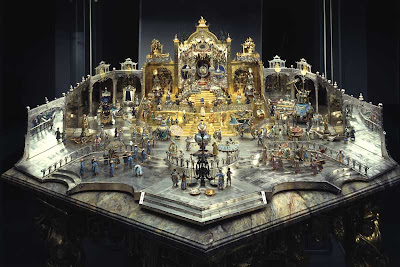 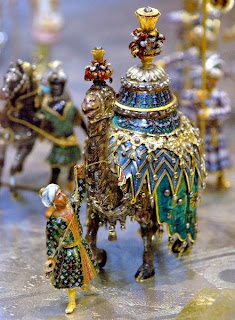 As I examined the gorgeous toy--or rather knickknack, since it had no earthly use save to be marveled at--I thought of Augustus' legendary cousin King Charles the Twelfth of Sweden, and how that energetic, impatient, intelligent young soldier might have reacted to such wanton extravagance. Compared with Augustus' lush wigs, gemmed silks, rampant libido and reckless excess, the celibate Charles with his cropped hair, stark uniforms, ascetic nature and unswerving purpose was an object lesson in the virtues--and hazards--of severity. My novel will describe those two remarkable and entirely opposite men, and I'll definitely include a scene in which Charles gets a tour of the Green Vault; he once paid Augustus an impromptu visit in Dresden, blithely disregarding the fact that he and his cousin were then at war with one another. Augustus, ever the gentleman, greeted Charles cordially, and let him depart unhindered.
Since I haven't the means to construct a Schatzkammer of my own, I keep one in the domed vault of my cranium. As with Augustus' collection, not much of mine is really useful, but it's a constant and ever-added-to trove of marvel and delight. Ideas and images from every place and time, all sorts of odd bits of information and out-of-the-way anecdotes, poetry, history, art, myths and legends, theater, music, languages, journeys, loves and passions...infinite riches from years of observation and countless books, that make my writing what it is. All my life I've been careful about what I stick in my brain, and now, in times like these, I cherish my mind-hoard all the more.

Posted by Carolyn Kephart at 11:55 PM No comments: