Oh, reason not the need! ~King Lear
During the Fall season I become at once nostalgic and merciless. I remember the past and either want it back or wish that it had never happened, and I sort out and/or get rid of whatever I feel I no longer have a need for. Useless knicknacks and trinkets, clothes that no longer suit me, shoes that never were comfortable, books and magazines that only take up space and collect dust, beliefs that no longer hold water...away with them. Winter is a spare, lean season only weeks away now, and I want to meet it on its own terms.

But some things I keep in defiance of mutability or reason. I love paper with a scribe's reverence (I love pens too, but that's another fetish for another blog entry). Empty books I'll probably always leave blank, delicate handmade washi  I just like to look at, origami paper too lovely to wreck by folding...I keep them safe and dry and bring them out now and then to contemplate, imagining possibilities. Here are some I recently collected on my travels to Japan and Taiwan; click on the images to enlarge them. 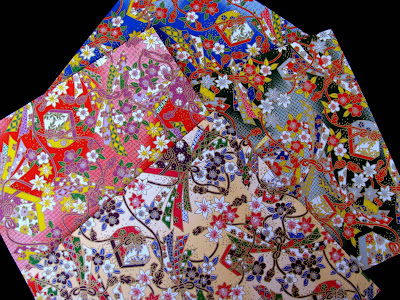 Very fine origami paper. The picture doesn't do justice to the splendor of the gold highlights.

A Japanese gift topper. I just can't bear to give it away yet. 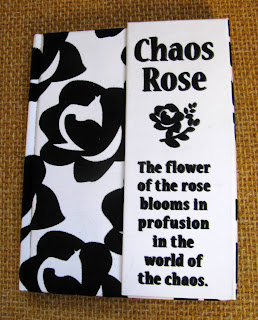 An empty book that says it all, in shiny white with black flocked velvet.
Anything I wrote in it would seem futile.

I suppose I acquired this in the naive hope that the contents would magically open up into the swan pictured on the wrapper. Had I looked closer I'd have realized that I'm expected to construct the bird myself from the enclosed myriad of tiny pink and red squares of paper. Maybe in my next life... 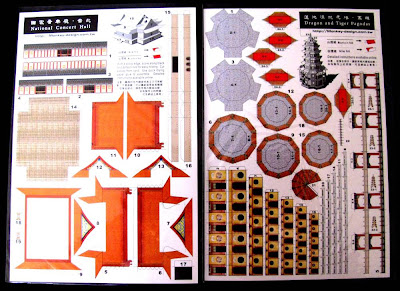 A couple of extremely teensy models (only a couple of inches high) based on very large buildings. I can't bring myself to pop them out of the cardboard and construct them. 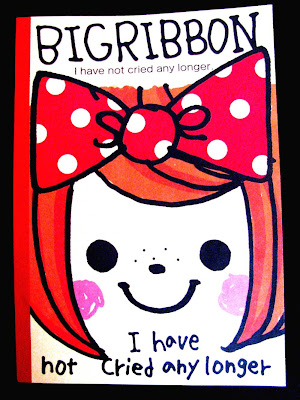 A perfect notebook for an ironic angst-filled autobiography.
I'm saving it for later.


Regarding writing matters, I was recently interviewed by David Wisehart on his popular blog Kindle Author. David asked an intriguing array of questions that I greatly enjoyed answering. See what you think!
Namaste,
CK
Posted by Carolyn Kephart at 7:19 PM No comments: 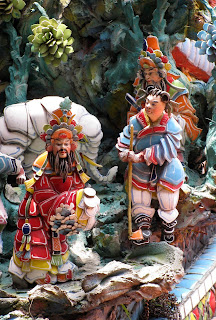 The two earlier installments of my Taiwan travels focused on exotic cuisine and gorgeous temples. This final segment will concern other aspects of Taipei, and some attractions outside the city. As with the first two parts, I was the photographer; click the images twice for the biggest view. 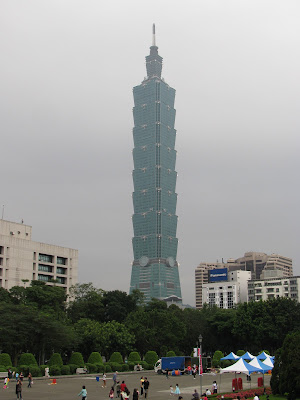 The bamboo-inspired tower of Taipei 101, which until recently was the world's tallest building. Within its towering shadow lies the city's upscale fashionable district, where European-style luxury combines with an elegance uniquely Eastern. 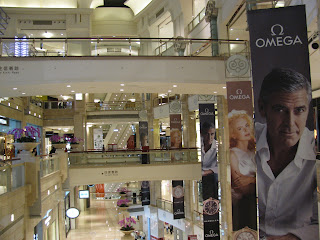 Inside Taipei 101's world-class shopping mall. Besides the trendy high-end boutiques one finds the world over, there were shops on the top floor's viewing area full of museum-quality Eastern jewelry and sculptures in coral and jade, with equally fabulous prices. I contented myself with the panorama of the city, watching as the sun slid into the mists, night stole over the land, and the lights came on little by little until everything sparkled as far as the eye could see. 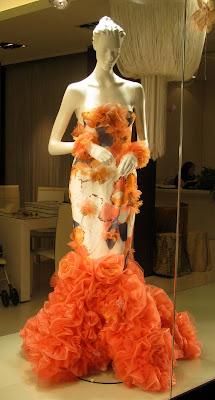 Ooh la la! Frothy finery at one of the dozens of full-service bridal establishments on Taipei's 'Wedding Street.' Marriage is a very big business in Taiwan, with every step of the elaborate ceremony painstakingly planned and no expense spared. Brides change outfits several times during the big day; this gown seems destined for an especially grand ball. 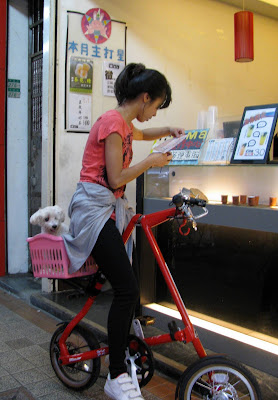 This picture is so Taipei--a pearl tea break with a
clearly cherished pet along for the ride. 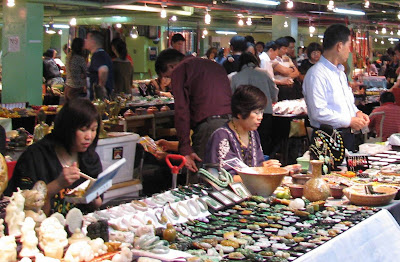 The entrance of Taipei's huge Jade Market. Antiques and other rarities are also sold there, making it a wonderful place to while away an afternoon. Expertise in jade takes long study, and I confess I couldn't see what made one bangle cost ten times as much as another; they all looked lovely to me. 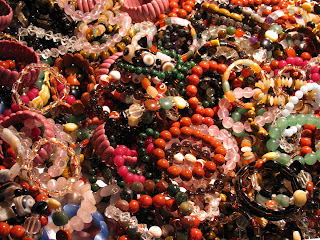 Not everything in the Jade Market was expensive. These stone bead bracelets were only a couple of dollars apiece, and kindred bargains abounded. 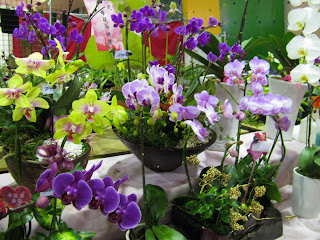 The Flower Market is right next door to the Jade Market. Both take place only on weekends, and are thronged by tourists and townsfolk alike. Fresh flowers are a way of life in Taiwan. 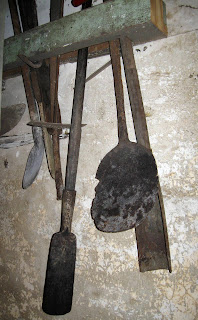 Antique implements once used for drying the island's fragrant, famed Oolong. These were in the workroom of Taipei's oldest existing tea shop, where the proprietors, two charming sisters, gave us an after-hours tour of the premises and a tasting of rare brew thanks to T. C., who seems to know everyone! 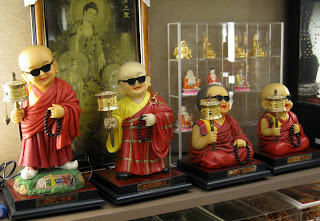 Hip little bhikkus in a Buddhist religious goods shop. It was very hard to maintain my Zen equilibrium and not take one home with me, but I contented myself with a pair of moon blocks for my own personal divinations. 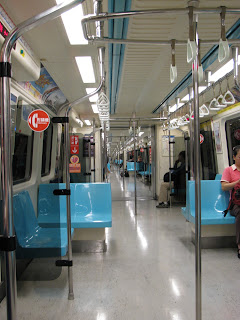 A view of Taipei's superlative subway--always spotless, civil, and on time to the instant. It's usually much more crowded than this picture shows, but we were coming home late from a perfect evening at the lively seaside district of Danshui, where Taipei goes to play on the warm summer nights. 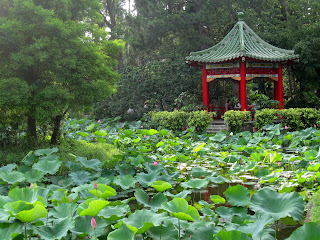 A view not of a court lady's pavilion, but one of Taipei's restful parks. Every inch of the pond's surface was crowded with huge sweet heavenly pink lotuses, one of the glories of early summer in the Orient. 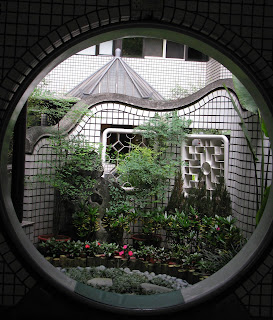 A surprise moon window view in a quiet neighborhood street. Every corner I turned in Taipei, I found something fascinating. 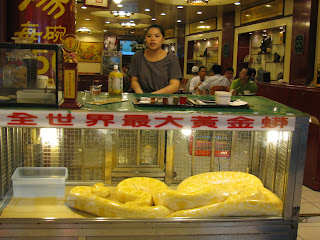 An exhibit demonstrating how the once-notorious Snake Alley in the old Dihua district got its name. Thanks to recent municipal improvements in the form of a new covered arcade and bright lighting, the place isn't nearly as raffish as it used to be.

Outside of town:
Besides exploring the city, we had a chance to visit some fascinating places on the outskirts, thanks to the kindness of Hub's colleague Otto Kong. As a pleasant finale, he and his wife invited us into their home for a memorable dinner of the freshest possible fish. 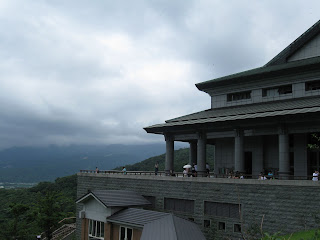 The serene spiritual fortress of Dharma Drum Mountain. Our visit there was an experience in order, generosity, kindness, and being deeply and happily at one with the world. 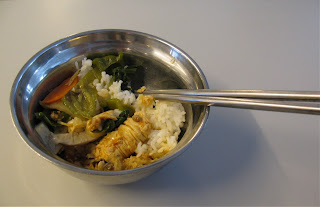 The midday meal at Dharma Drum is provided free of charge to the retreat's hundreds of visitors. Despite the crowd, everything was so well-organized by the numerous volunteers that we were served in a matter of minutes. The food was vegetarian and simply delicious; I finished my bowlful down to the last grain of rice. 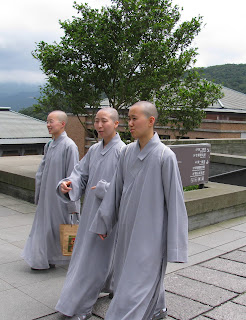 Buddhist nuns at Dharma Drum. The moment I said hello, they all smiled and greeted me with the Namaste. Their grace and sincerity were deeply moving. 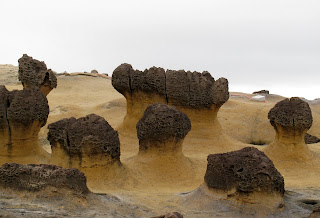 Natural statuary at Yehliu Geopark, an incredibly strange and
beautiful landscape on the edge of the sea. 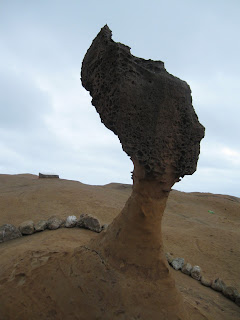 The park's most famous formation,
The Queen's Head. 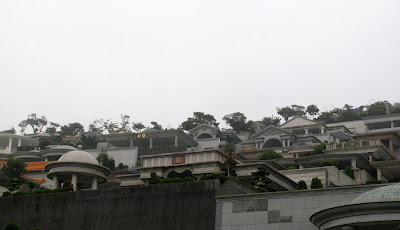 The above image really must be clicked twice for the full enlargement. On a prime location overlooking the ocean stands this fantastic city, inhabited solely by the dead. Confucian tenets honor ancestors, and palatial tombs like these attest to the most profound filial piety. The day was drizzly and gray and the place was deserted, adding to the solemn, eerie atmosphere. 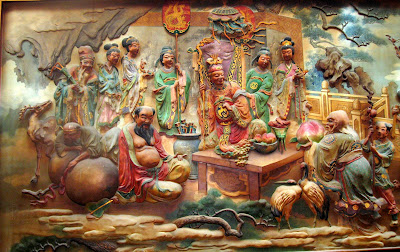 A stucco relief (huge, covering an entire wall) portraying a gathering of the gods, in an eye-bogglingly gorgeous temple at an otherwise plain little town named after the goddess of mercy, Guanyin.

I'll always be grateful that I had a chance to visit such a fascinating country. As a final image for this, my third and last Taiwan blog post, here's a pair of perfect bunches hanging out at a favorite fruit market: 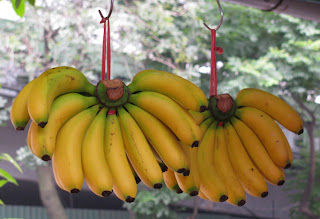 I hope you enjoyed the travelogue as much as I enjoyed the trip! My upcoming posts will be all about Fall, the season that resonates most with me.
CK

Posted by Carolyn Kephart at 3:06 AM 3 comments: