Tomorrow marks the autumnal equinox, officially the last day of summer. For the past many years I've viewed the event with regret either bitter or resigned, but this one's different. This winter I'll be warmed by memories of harvest and the promise of even greater growth to come.

Some time ago while writing in a forum I invented a character named Yin Qi, an imperial concubine called Autumn Grass by the other court ladies in mocking reference to her advanced age (she was thirty) and inferior rank (she was of very minor nobility, from the barbaric northern steppes). What inspired her creation was a picture by Shibata Zeshin, c. 1870: 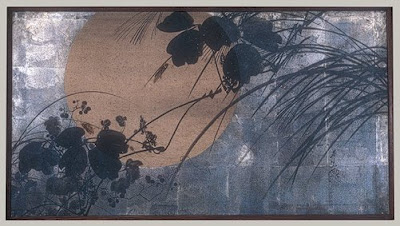 The first time I ever saw this exquisite image, the original of which is worth a trip to New York where it lives, I instantly recalled Archibald MacLeish's riskily precious wish that

A poem should be motionless in time
As the moon climbs

Leaving, as the moon releases
Twig by twig the night-entangled trees

Leaving, as the moon behind the winter leaves,
Memory by memory the mind—

A poem should be motionless in time
As the moon climbs.

In a story I've submitted to a flash fiction journal, I describe the moon through a warrior's eyes, as a shield of gold dented from countless blows.

It is always best to fulfill old dreams before moving on to others, and to that end I'm working at joining my Ryel Saga into a single volume, with a new cover of my own design: 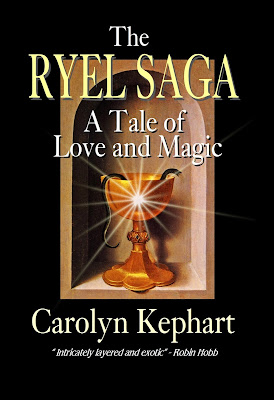 Then it's on to everything else, uncounted pages else. It doesn't matter, the passage of the equinoxes. I will move as the moon climbs.

The Lady and the Mage

I enjoyed writing Last Laughter so much that I'm thinking of more short stories involving my as yet anonymous Countess and Cyril Dagleish Dacier, the Thaumaturge Royal. When I began the tale, I thought of it as typical standard fantasy set in a semi-medieval world, but by the end it felt (to me, anyway) decidedly Edwardian, hence the court mage's quaintly British name. I never thought I'd ever write anything steampunk, but there it is, with perhaps more to come. Last Laughter is now fully corrected and will be at Silver Blade for an entire quarter-year; I hope it garners lots of readers.

The Kindle and other digital versions of my novels are finding a wide audience, and I couldn't be happier, more optimistic, or more energized.

CK
Posted by Carolyn Kephart at 6:51 PM No comments:

Hot Off The Presses

I'm happy to announce the publication of my short story 'Last Laughter,' now appearing in the current issue of Silver Blade Fantasy Fiction. The entire site is very attractive, and my story has a terrifically scary/funny/witty cover, plus other illustrations.

There are a few corrections that will be made in the next day or so. A phrase in the first paragraph should read "Whenever his behavior became simply too appalling."

Another short story, 'The Kind Gods,' will hopefully be hitting print fairly soon. And I've finally gotten around to finding the right ending for another yarn that I've been fussing over for ages, 'The Heart's Desire.' The two couldn't be more different: one is a Vikingesque afterlife dilemma from a warrior's perspective, and the other's set in an all-too-near future involving a government scryer and her discovery of the ultimate secret language.

Posted by Carolyn Kephart at 10:28 PM No comments: